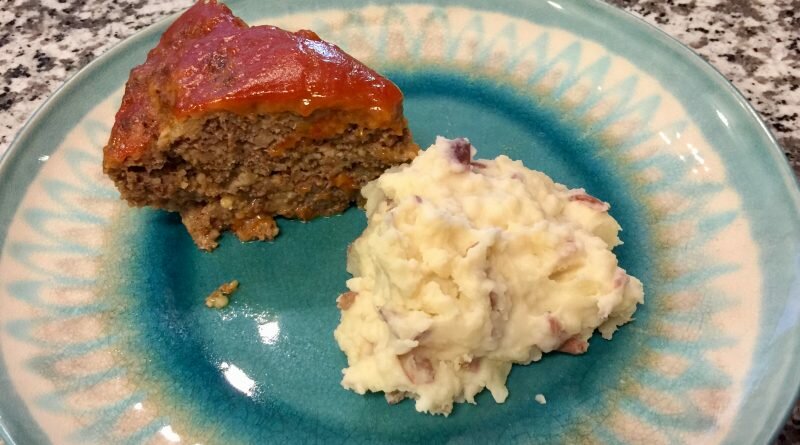 I’ve tried several Instant Pot meatloaf recipes, and while all of them were good, this one was particularly tasty (especially the topping), and the recipe from IWashYouDry.com had the added benefit of mashed potatoes, making this a great one-pot meal.

For this recipe you’ll need a large mixing bowl to mix up the meatloaf ingredients, something to smoosh the potatoes with after they’re cooked, and – of course – your Instant Pot. Past that, it’s very straightforward and will come out great!

It’s easy to convert this recipe to gluten free by using gluten free breadcrumbs (these are the kind I happened to get, and they worked great) and gluten free BBQ sauce (lots of choices for that!), and also make sure the ketchup you use is gluten free.

While you can just shape the meatloaf on a piece of aluminum foil and set it on top of the mashed potatoes, I opted to put the meatloaf into my Fat Daddio 8-inch by 3-inch push pan (which will fit in a 6 quart pot) and put that into the pot using an aluminum foil sling. You don’t have to do it that way, of course; that’s just my preferred method. Also, don’t be alarmed if the pan with the meatloaf sits high in the pot after you settle it in on top of the potoatoes: as long as it has room for the lid to close, you should be good to go (see photo).

Another modification would be to take about 8 strips of bacon and cover the top of the meatloaf and cook it in the Instant Pot as per the recipe. When it’s done cooking, coat it with BBQ sauce and stick it under the broiler until it caramelizes. Yum!