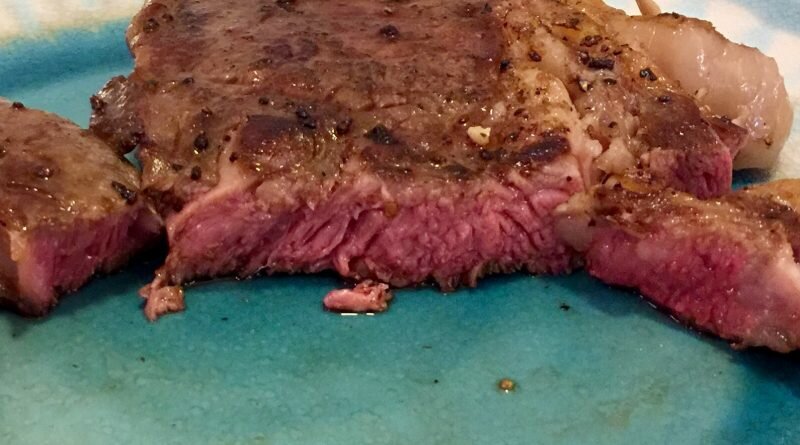 I consider myself competent with a grill, and I’ve served up some pretty darn good steaks in my time. But I have never had a steak as good as the one I recently cooked sous vide in my Instant Pot Ultra. After that experience, sous vide is the only way I’ll ever cook steak – and most other cuts of meat – from now on!

What Is Sous Vide?

That’s a good question – I’m glad you asked! Sous vide is basically cooking food inside a sealed plastic or silicone bag in a controlled temperature water bath. And instead of torching your food, you cook it at a lower temperature and for a longer time than you would otherwise. The temperature of the water determines the done-ness of the food, and you don’t have to worry about overcooking it. Just as important, the food will be cooked uniformly all the way through, edge to edge!

For example, a 1″ thick ribeye steak will be a perfect medium rare when cooked in water at 134F for one hour. But you never have to worry if you leave it in there more than that (up to 4 hours), because the meat is only going to get to 134F.

To finish a cut of meat like a steak, you remove it from the sous vide bath, take it out of its bag, and sear the sucker in a hot pan (I prefer a cast iron skillet) with some oil or butter for 30 to 60 seconds on each side, just enough to get a nice crust on it.

Note that many restaurants have been using this method of cooking for decades: this isn’t a new fad that’s suddenly hit the scene. Restaurants can prepare a number of steaks at different done-ness and keep them ready in their sous vide baths until an order comes in. Then they’re snatched from the bath, given a beautiful finish with some searing, and served to your table.

I was thinking about getting a second Instant Pot, anyway (I already have a 6 Qt Duo), and had been thinking of giving the sous vide method a try. So when the Ultra came out, with a temperature control function that allowed sous vide cooking, I got one!

To get me started, I followed a video by ChefSteps to prepare the steak, seasoning it with salt, pepper, then sticking it into a ziploc freezer bag with a pat of butter and a couple of bay leaves (dry, in my case, as that’s what I’ve got on hand). You could also add garlic powder or any other seasoning you like.

Fill up the inner pot with HOT water so the Ultra doesn’t have to spend its time heating up cold water. I filled mine up about 2/3, then added in more hot water after I added the steak until it was around 3/4 full.

Set the Ultra to whatever temperature you want using the Ultra function and setting the custom temperature (I made a cheesy little video on how to set it). To figure out the temperature and time you need, there are all kinds of sous vide time and temperature charts out there, like this chart from SousVideSupreme.com.

Then comes the only “hard” part: getting the air out of the cooking bag! You want to suck as much air out as possible so the water can snuggle up right against the meat, all around it. It’s not a big deal: just dunk the bag into water (I just used what was already in the Ultra, but watch how hot the water is!) and let the water pressure do the work. I also just sucked some of it out with my ol’ lungs. Of course, if you have a vacuum sealer, this process is a lot easier, lol!

The only thing you have to make sure of is that the steak (or whatever you’re cooking) stays completely submerged. I usually do that just by clothespinning the bag to the rim of the inner pot in such a way that the rigidity of the bag keeps the steak down low in the water.

Now…go watch a show for an hour. Take a nap. Play with the kids, cats, or dogs. Read a book. Play a round or two of Battlefield 4. Or if you don’t have sides already prepared, you can do that.

When at least the minimum time has elapsed according to the time and temperature chart, you’re ready to take that nomalicious steak out of its sous vide bath and sear it! This is technically called “reverse searing,” because in most cooking methods you sear meat before you cook it.

Get a pan – I prefer a cast iron skillet like this one made by Lodge – or a grill nice and hot. If you’re using a skillet like me, put a bit of high temperature oil in it when it’s hot, then add the steak. Swirl it around slowly in the skillet with a fork for about 45 seconds or so, but not much longer. Remember, it’s already cooked! You’re just finishing it. Then flip it over and slowly swirl it on the other side.

And you’re done! Stick it on a plate with some yummy sides like potato salad and backed beans, then dive in!

In all honesty, the steak I cooked sous vide in my Instant Pot Ultra was the darned best steak I’ve ever had, and I’ve had some good ones. It was also easy as pie to do! I’ll never cook another steak (or burger, or chicken breast) any other way.

Some Questions You May Have

Why the heck would I want to take that long to cook a steak (or burger, etc.)? I want fast and easy with my Instant Pot!

I believe in using the right tool for the job. If I want to whip up some mac & cheese or make a mouth-watering beef stew, or maybe the ever-yummy honey garlic chicken, the Instant Pot (and its standard cooking functions) is my best friend on the planet. But there simply is no better way to cook something like steak (or burgers, for that matter) and many other cuts of meat and other things than sous vide.

Can I do sous vide cooking without an Instant Pot Ultra? What if I have a Duo or a Lux?

Absolutely! Heck, you can sous vide something in a cheap cooler using nothing more than water heated to the temperature you need and monitored with a thermometer. The Ultra just adds that capability onto all the other things other Instant Pots can do.

If you want greater temperature control and water circulation (the one thing the Ultra lacks), you can get a circulator to stick into your Duo or Lux, or any other large pot or other container you have that can hold water. The circulator keeps the water at the temperature you set and swirls it around to help maintain a constant temperature throughout the bath. The Anova, pictured here, is a very popular model, but there are many circulators to choose from.

I have an Ultra, but can’t figure out how to set the Ultra custom temperature control!

No problemo! If you can stand to watch it, I made a quick cheesy video on how to do this. Click here to check it out.

I don’t like the idea of using plastic to cook my food. Are there any alternatives?

To the best of my knowledge, the only other option are silicone bags like these. Silicone isn’t exactly plastic, but it’s not exactly…not. It’s a hybrid material, and if you’re concerned about plastic, you’re probably not a fan of silicone, either. For me, I figure that the cooking temperatures are low (130 or so to maybe 170F), and considering the other toxins we’re exposed to on a daily basis, cooking something in a freezer bag or vacuum sealed package isn’t going to be what does me in.

Now, for liquid-type things like yogurt, for example (yes, you can apparently cook yogurt sous vide!), you can use mason jars or other glass containers.